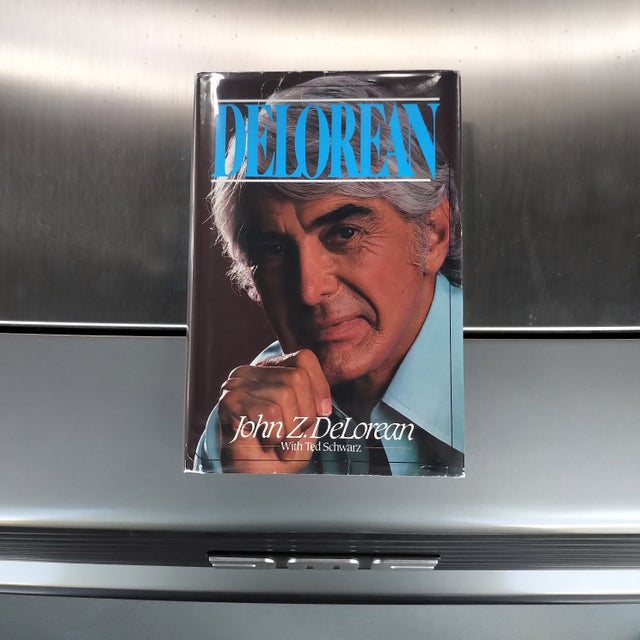 Each copy from The DeLorean Museum comes with an original DeLorean tri-fold brochure as your gift with book purchase.

From the dust jacket flap of the book:

Since the sixties when he was known as the brilliant but brash young executive at General Motors, John Zachary DeLorean has been one of the most controversial public figures in the United States and, of recent years, the world. His 6”4” Lincolnesque figure and his striking appearance have made him one of the most photographed and recognizable celebrities outside of Hollywood. He has only to set foot outside his front front door to make headlines.

Admirers see DeLorean as the man who stood alone against the corporate rulers on the Fourteenth Floor during his tumultuous days at GM., the man who, against all the odds, built his own auto factory in Northern Ireland. Detractors have dubbed DeLorean a playboy, an auto baron, a man of masks, a “Gatsby,” an American villain - the designations seem endless.

Despite all this exposure, the public figure has proved to be a very private man. And whether they praise or condemn, people all ultimately ask the same question: Who is the real John DeLorean?

The furor surrounding his decision to build his own sports car paled in October 1982 when headlines rocked the world and topped every other outrageous statement ever made about the man: John Z. DeLorean, captain of a sinking ship, had been arrested and accused of trafficking in cocaine!

DeLorean was silent during his arrest and subsequent trial. Since his acquittal on all charges and the breakup of his marriage to Christina Ferrare, he has said little, beyond a few interviews about his conversion to Christianity and some of his immediate views on the government case.

Now, for the first time, John Z. DeLorean speaks out about the man behind the headlines. Many have attempted to tell his story; now it is his turn.

“The man writing this book is not the same man who left GM over a decade ago...This is the true story of my reluctant journey from the pursuit of personal power and glory to the deepest meaning of life.”

While they are all in very nice condition, as a nearly 40 year old, book there is some variations between the copies. All pages are intact, and the cover is intact. The spine may show signs of wear. Pages can include limited notes and highlighting, and the copy can include previous owner inscriptions.