As part of a promotion with American Express in 1980, the DeLorean was featured on the cover of the American Express Christmas catalog. A limited edition of no more than 100 DeLoreans, with 24-karat gold plating, were offered at $85,000 each. Only two were sold through this promotion.

The story of how the cars came to be assembled is well documented in the DeLorean books "John Z the DeLorean and me...tales from an insider" and "DeLorean: Celebrating the Impossible", but of note is that in addition to the two gold-plated cars assembled at the DeLorean factory, a third car was completed using the spare set of panels (created in case one of the two was ever damaged) and a much earlier production, engineering development, vehicle after the factory closed in late 1982.
There has been a rumor that the gold cars, specifically the one now in the Petersen Museum with just 9 miles on the odometer, were not driven on the test track at the factory. These photos below of the gold cars being test driven at the factory were among the files contained in the Christopher Bradley Archive, and presumably were taken by Mr. Bradley. There are also some interesting photos of the gold cars undergoing final assembly, as well. Many of these photos are of VIN 4300, the car with the tan interior, though if you look closely in the final assembly photos, you will see a few of VIN 4301, the black interior car.
VIN 4300, pictured below, with a manual transmission and tan interior, is at the National Automobile Museum in Reno, Nevada.Though almost always on display, call ahead to avoid disappointment if you are making a special trip to see it. Photo courtesy of James Espey. 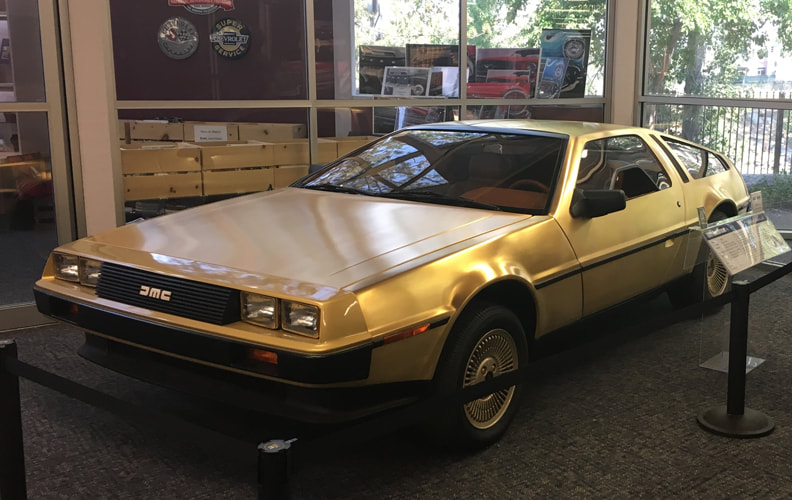 VIN 4301, shown below in a rare "outdoor" moment, with an automatic transmission and black interior, sat for many years in a glass case in the Snyder National Bank lobby in Snyder, Texas. In the early 2000's the car was placed on display at the Petersen Automotive Museum in Los Angeles, California. It is not always on display, so call ahead to avoid disappointment if you are making a special trip to see it. Photo courtesy and copyright of Matthew Howell. 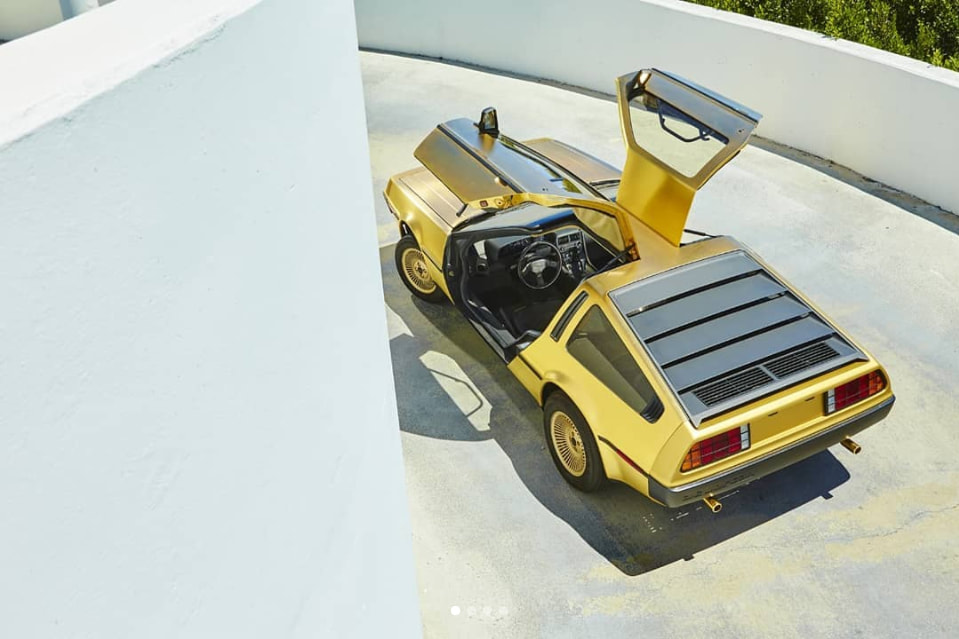 VIN 20105, with an automatic transmission and tan interior, and though it carries the "final" VIN, it is known to be a much earlier production car. Consolidated International stripped the earlier production car of it's interior and stainless skin after the car was shipped to the USA in 1983, which were replaced with the spare set of gold panels and the spare tan interior kept on hand in case either of the other two were damaged. In the listing above showing the prices of the "spare" gold car parts, notice that there is only a left-hand door listed. Reportedly, one of the right-hand doors was damaged at the factory in Dunmurry, leaving DMC without a "spare" right door. In order for Consolidated International to complete the "re-skin" of this car, they had a door plated here in the USA, which is a bit darker than the rest of the panels.

The photos below are of this car, which is now in a private collection in Maryland. Photos courtesy of James Espey.

In addition to the three gold plated cars - two created at the factory and one from the spare set of panels as described above - two other DeLoreans are known to have been gold-plated privately by their owners.

VIN 1542 with a manual transmission and black interior was privately plated by it's owner in New York in 1981 and last known to have been sold to someone in the Toronto, Canada area. The owner of the car at the time recounted this story on the car:

This was 30 years ago, so I will do my best to describe the sequence of events that took place.

In 1981, I took delivery of the first DeLorean on Long Island, NY and paid about $28,000 including a premium for getting the car early. I had received an offering by American Express describing 100 24K gold Deloreans to be built and sold at the price of $85,000 each and I thought how cool was that. I did some research and figured I could do it on my own and located an electro-chemical plating business in Laurel, MD called Brushtronics Engineering and arranged to have my car gold plated. It was not done by dipping each individual panel into an electroplating bath as were the 3 that were done for Amex...my car was already assembled and that was too impractical. Rather, a process known as brush-plating was done...one panel at a time. Since stainless steel develops an oxide coating, the first step on each panel was to electrochemically clean the surface to remove the oxide and contaminants. Since gold does not adhere well to stainless steel, each cleaned panel was then nickel plated first and finally plated with 23K hard cobalt gold by dipping cloth coated wands hooked up to an electrical current into a clear solution containing the gold ions and then "brush" the panel depositing the gold onto each panel. After each panel was finished, a levigated aluminum oxide white powder was used to polish the gold to a high luster. This procedure was repeated on the same panel several times to build up the gold thickness. I believe it took at least 2-3 months to complete the entire car in MD and then I drove it home and took it to a local body shop to have the wheels and soft bumpers sprayed with gold paint to match the plating. The gold plating also included the exhaust tips. I also had a neighbor make up a rectangular brass plate that was engraved 24K Gold Plated Delorean and glued to the passenger side dashboard.

I have numerous photographs of the car which appeared on TV in the DC, MD area news (have video tape with me on it) as well as TV in Atlantic City, NJ where I had put it up for auction (did not sell). None of the photos are digital though as they were taken in '81 before digital photography.

Brushtronics submitted an article in a "Plating and Surface Finishing" trade journal and sent it to me. It shows my car when it was being filmed for TV and also shows a great picture of it sitting with gull wings high and sitting next to John Lennon's psychedelic Rolls Royce as the show cars of the Atlantic City auction.

Many months later, I sold the car to a man from Canada and the picture of the car sitting in the driveway of my first house in North Woodmere, LI NY appears on the link that I sent in my previous mail. This picture was taken by the buyer the day he picked up the car and later appeared in Road and Track magazine for sale as I understand that he could not bring the car into Canada due to some technicality and stored it in a garage for some time near Niagara Falls, NY. I don't know where the car eventually wound up...but that's my story. Oh yes, the entire project including travel, hotel, painting wheels/bumper and the gold electroplating cost me about $8,000 in 1981.
VIN 16625 - For years another privately gold-plated car rumored to exist and in fact, one was advertised in the February 1990 issue of DuPont Registry by a car dealer in New York. The car was unusual in that it was described as "24 Karat gold-plated" yet the front fascia was still painted silver. An additional identifying trait was the door inner on the left door was plated, but the door inner on the passenger side was not.
​In June 2017, this car surfaced in what appeared to be a court-ordered auction in Flint, Michigan and was identified as a 1983 DeLorean with a VIN ending in 16625 and 156 miles on the odometer. This car has a black interior and a manual transmission. Here is a short video posted by the auction house:
The car sold at this auction and is now in a private collection and occasionally is seen at shows in the northeast United States.