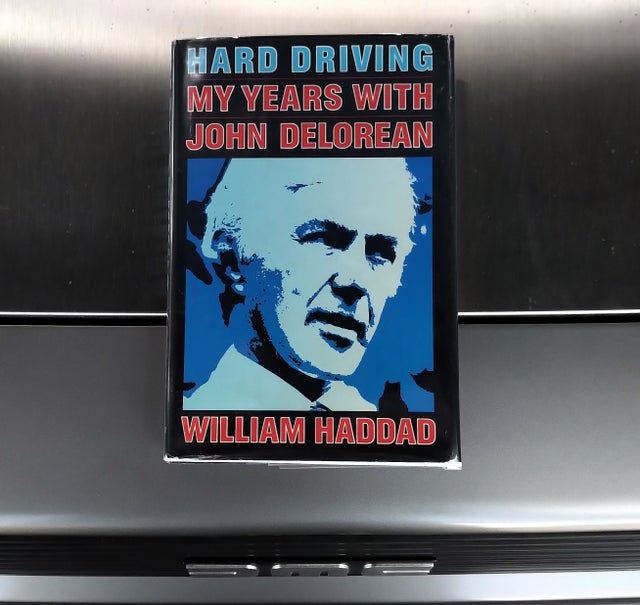 Each copy from The DeLorean Museum comes with an original DeLorean tri-fold brochure as your gift with book purchase.

From the dust jacket flap of the book:

Here for the first time is the inside story of the life and times of John DeLorean, one of America’s most visible and controversial business figures. William Haddad's politician, businessman and award-winning investigative journalist-worked with DeLorean for fifteen years as a consultant and eventually a top executive of DeLorean’s ill-fated sports car company. In Hard Driving he draws on his skills as a reporter and on firsthand insights to paint an absorbing, often disturbing portrait of DeLorean and of how American big business operates.

Haddad has amassed a wealth of detail about DeLorean’s career. But this is not a dispassionate biography. Haddad, once a strong admirer of DeLorean’s, became disillusioned and later outraged by what he learned about the automaker in episodes described in this book. He reveals the DeLorean business style: his use of “black books” to intimidate associates, beginning with top officials at General Motors, and his treatment of negotiating partners from the governments of Puerto Rico and Ireland, in settings from the Waldorf to Whitehall. The technique often involved last-minute demands and complex double-deals. Haddad also tells of DeLorean’s wild political notions, such as a plan for a worldwide intelligence network and a plan, seriously presented to a senior White House aide, for a takeover of Saudi oil fields. In graphic detail he shows how DeLorean ran his sports car company until it went bust, apparently using little of his own money to raise about $250 million, which he has since lost.

This story ranges from the scandalous to the hilarious as it recounts DeLorean’s activities in boardrooms and salons. What emerges is a picture of a man with a kind of manic genius that is ultimately as self-destructive as it was hurtful to those around him. After reading Hard Driving, Americans will finally understand why John DeLorean keeps getting into so much trouble.

While they are all in very nice condition, as a nearly 40 year old, book there is some variations between the copies. All pages are intact, and the cover is intact. The spine may show signs of wear. Pages can include limited notes and highlighting, and the copy can include previous owner inscriptions.